He added one more task to his plate in late 2019. Dennis is the man behind the People of Pathology podcast, handling everything from planning, research, interviewing, editing, and publishing the show.

Dennis graciously accepted Voicebrook's interview invitation to talk about People of Pathology, as the podcast approaches its first anniversary this December.

Voicebrook: Thanks for taking the time to chat with us! We're big fans of the show. What made you decide to dip your toe into the podcast pool?

Dennis Strenk: I'm a fan of podcasts and some of my favorite ones are the interview-type podcasts. There weren't any podcasts for the people in the lab -- people like us, and I thought it would be kind of cool if there was, so we could talk about our jobs.

VB: You're a PA, so you have a unique perspective on working in the pathology field. Does that shape how you produce your show?

DS: I used to be a histotech, so I have that perspective as well. Some of people I've interviewed have been pathologists, forensic pathologists and things like that, but I try to get the histotechs, the cytotechs, the clinical laboratory scientists too. I wanted to include everyone in the lab and I've had a couple of PAs on as well. I want to shed light on all of these positions, because we’re all short-handed. At the same time, I wanted to learn about the ones that I didn't know about. For example, the clinical laboratory scientists -- I don't know anything about that job. But I've learned so much about it from talking to them.

DS: There were a lot of other people who had the same idea [for podcasting] at pretty much the same time. I've been collaborating with some of them and I've had a few of them as guests on my podcast to compare notes or just talk about their podcast and what it's about and things like that. So that's been really fun to meet other people that had the same kind of idea.

VB: The good news is that there are so many topics out there and so many great people to profile. There's really room for everyone.

VB: In less than a year, from December until now, you've produced 32 episodes of People of Pathology. That's a lot of content! Is it difficult to handle all of the behind-the-scenes production work?

DS: It depends on how good the sound quality is. One of the things I really wanted when I started was to sound good, so I've got a good microphone and good headphones. I spent a lot of time learning the software. The program that I use to record (because they're all remote interviews) records each person from their local computer. So in theory everybody would have the best quality sound and then I can download those tracks as separate tracks. I can edit them independently to make them sound better. 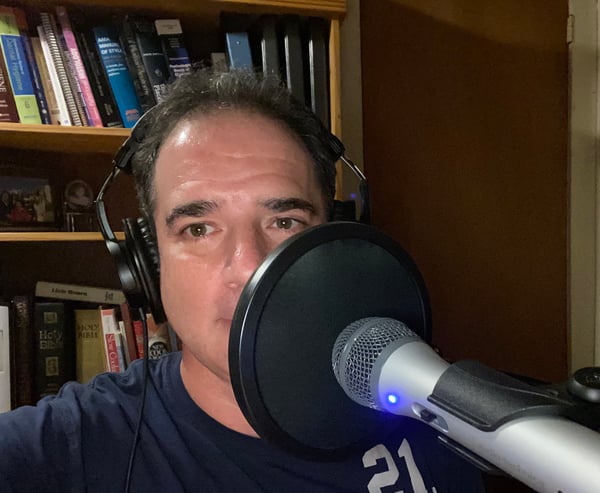 VB: You have a knack for really getting to know people during your interviews, branching out to talk about topics that even go beyond pathology.

VB:  It's fun to see where the conversation leads. Do you always learn something new with each interview?

DS: It happens all the time. I could probably point out something from every single episode. That's a really fun part because then I can just sit here and listen to them talk. I wish sometimes that it was on video also, because you could just see the look on my face where I'm so amazed. Sometimes there's a point where they're talking and I'm just listening, and I forget that I need to say something too, because they're so interesting.

VB: What are your favorite episodes?

DS: There are so many. My fourth episode featured Dr. Judy Melinek and her husband TJ Mitchell. She's a forensic pathologist and he is a writer, and together they've written two books now, so I interviewed them about their latest book. It's called "First Cut." At the time, this was only my fourth episode, so I was a nobody and they were New York Times best-selling authors. It was really cool just to talk to them and I did so much research for that episode.

Another favorite of mine was Dr. Constantine Kanakis. He was a former clinical laboratory scientist. At the time I talked to him, he was just finishing medical school going into pathology residency. He's a super interesting guy. When I started researching him, there was just so much about his background and he's done so many more things than I've ever done. It was really fun to talk with him. He's just a very warm, talkative guy.

More recently, I interviewed Dr. Syed Hoda. He's very interesting, very warm and friendly. Some of these are less of an interview and more of a conversation and those are the ones that are really fun.

VB: Podcasts like yours go a long way in inspiring those who are going to be future pathologists and laboratory professionals.

DS: That's the major goaI. I say at the end of almost every episode, "Let’s inspire the next generation." Originally I just wanted to talk to other people in the field and learn about them, but from talking to some of them and hearing their inspiring stories, now I want to inspire other people. COVID has shown us that labs are understaffed from from top to bottom, so we need more people. I want to inspire those people to look at our field and realize it's great. They should join us.

You can listen to the People of Pathology podcast on Podbean or Apple Podcasts.