PathElective: Bringing Pathology Education to You

Dr. Kamran Mirza's face lights up as he recounts the story: One of his pathology colleagues in the United Kingdom left work late at night this July, and noticed a trainee huddled at a computer. Curious, he asked the trainee what he was up to. The response? The trainee was studying on PathElective.com.

"This was a histopathology trainee in the UK, and that blew me away. That was amazing," says Dr. Mirza.

Not bad for a website that didn't even exist back in April. In a matter of months, Dr. Mirza has collaborated with the pathology community to create PathElective, an adaptable pathology elective experience that's being used around the world.

From Idea to Actuality

As an Associate Professor of Pathology and Vice Chair of Education at the Loyola University Chicago Stritch School of Medicine, "One of my roles here is to direct the pathology elective, and as students come into our elective,  we found that we could engage them in many ways in person," Dr. Mirza explains. "But there’s always a little bit of downtime, and we were looking for ways to fill that in an academic sort of way. Juxtapose that with the pandemic, where we can't even have them come in anymore due to social distancing, and we figured, wouldn’t it be great if we had a platform where we could do this elective virtually. As a result of that need, PathElective.com was born."

But Dr. Mirza needed help (and a co-founder) to pull this vision off. He approached Cullen Lilley, a second-year medical student at Loyola University Chicago Stritch School of Medicine. Lilley serves as president of the school's pathology student interest group.

"He is a superstar, and an amazing individual," says Dr. Mirza. "I asked him one day back in April if he had any experience developing a website. He said, ‘No, but I can take a look at it.’ Literally two months into this, we have this fantastic website. I basically asked him to join forces with me and do this as a summer research project, and he more than delivered." 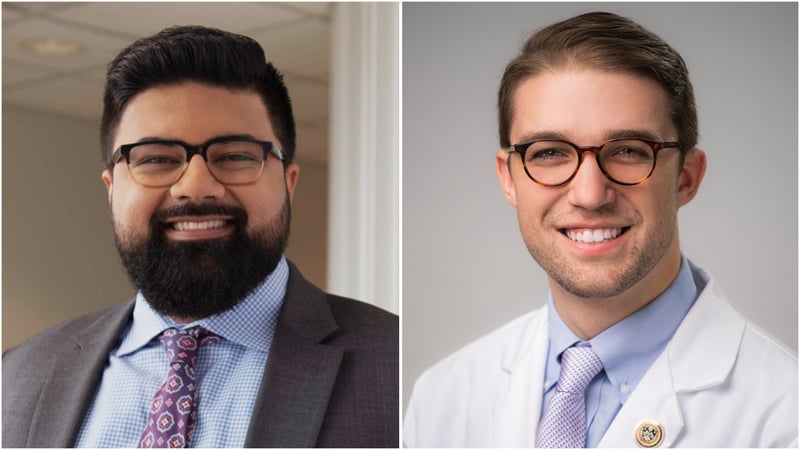 "The pandemic changed the course of things," Lilley agrees. "I was supposed to be doing research in the pathology department over the summer. When that got put on the side burner because of the pandemic, we decided to put all of our efforts into the website."

Those efforts resulted in a free, high-quality, organized, and adaptable pathology elective experience. It's multi-functional, featuring anatomic pathology modules, clinical pathology modules, and molecular pathology modules. There are also sections for career enhancement and development, myth busting, and other useful resources. Users simply sign up, complete the lessons, and earn certificates. It's completely flexible and users can learn as they go. 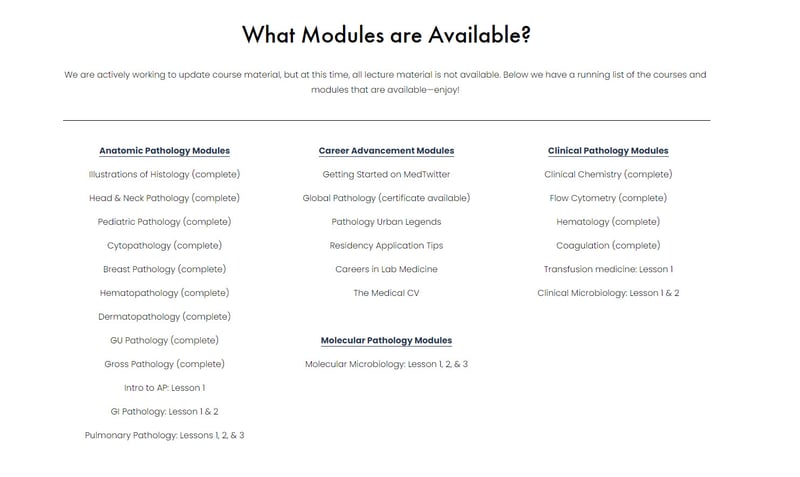 The content comes from the best sources around: Dr. Mirza's world-renowned pathology colleagues. When approached with the idea of becoming faculty for PathElective, more than fifty people responded with enthusiasm.

"When someone as ardent about pathology and teaching as Kamran asks you to contribute content about the field you're in and very passionate about, it makes it almost an easy and fun experience despite the after-hours work that goes into it," says Alexis Snyder, a pathologists' assistant at UChicago Medicine. "I hope that users are learning and really getting a better insight into the field of pathology."

"It is an amazing testament to the fact that we create all those stereotypes about pathologists, which I don’t even want to repeat because I don’t believe them, but let’s just say that definitely people aren’t imagining that we are friendly and welcoming and rambunctious and outgoing," Dr. Mirza says. "[But] Cullen and I had this idea, and we put it out there, and reached out to people mostly who we’ve met on social media and they all answered the call. It was the right idea at the right time, and everybody delivered. We couldn’t have created even a third of the data that is there [on our own]. This is basically created by experts in the field. We just gave them the tools and the framework."

That framework was created by Lilley. He's the guy behind the scenes who aggregates all of the material supplied by the subject matter experts, designs the website, and creates the quizzes that users take at the conclusion of each lesson.

"It can be a little intimidating at times," Lilley says. "Pathology is a huge field and people train for a very long time. They know minute details that I [as a student] won't know for a very long time. So I am making the quizzes and I'm like, 'Is there supposed to be a picture here? I don’t know!'"

Dr. Mirza says Lilley needn't worry. "He's being very humble; he held his own. You can give people projects, but where they take it and how they shine with it is very individual, and he is a rock star."

PathElective went live July 1st, and it was an immediate hit. In just the first few weeks, nearly 19,000 individual users visited the site, generating 80,000 page visits. They weren't just there to take a look around, either. Users dove into the modules, resulting in 600 certificates being awarded in just the first week and a half that the site was live.

"It's humbling for me, because this is not a rocket science idea or novel idea. It's just about putting together a website with education, but people really responded to it and I think that is awesome," Dr. Mirza says.

So far, the anatomic pathology modules have been very popular, but the most popular has been gross pathology. That module has almost triple the numbers of other modules, in terms of total viewership, pre-quiz and post-quiz data, and certificate generations. Dr. Mirza notes that the gross pathology module wasn't authored by a pathologist, but rather by pathologists' assistants.

"Right now a lot of new residents are starting and the basics of gross pathology are a critical thing that everybody is trying to learn. Those lessons are exactly what we wanted. They are personalized and made for our website. They are numerous and short. There are videos and actions, and things happening and those are things that make for a good educational experience," he says.

Everything on the site is high-yield content, delivered in an accessible compact package from the professionals actively doing the work across the country and in some cases, the globe.

Though the website was originally created with medical students in mind, PathElective has revealed itself to have a much greater reach. Because the site is so engaging and accessible, Lilley notes that it's a helpful resource for industry and for those on the business administration side of healthcare to understand what’s going on in the lab. Educators can incorporate PathElective's resources into their electives as a supplement to the work they're doing in person. Dr. Mirza believes that PathElective can flex to the particular needs of nearly any user.

Lilley agrees with that assessment. "This is an amazing resource even for pre-clinical medical students. A lot of the modules delve into different pathophysiology and more intricate parts of pathology, but learning the different methods on how different tumors or infections are diagnosed, the molecular methods, all of that is amazing. It's a really critical part of being a clinician, no matter what field you end up going into, so pre-clinical years would be a really great time to tap into this."

Looking ahead, users can count on fresh new content and perhaps even a few additional ways to utilize the site. Dr. Mirza is hoping to add some sub-modules that describe pathology to their patient-facing colleagues, such as fellows in other clinical specialties like hematology, oncology, gynecology, etc.

"All of them need a broad overview of pathology," Dr. Mirza says. "Dr. Jerad Gardner, who runs our dermatopathology section, was thinking of developing an advanced dermpath elective module. He can have people from across the globe (who aren’t sitting at his scope) doing a year of fellowship with him. From wherever they are, they could access this advanced elective."

Lilley would like to offer some specialization certificates where users can actually participate in the conversation online. They could post tweets that pertain to the different modules they're participating in, take a comprehensive exam at the conclusion of the module, and earn a special certificate that he says would "mean a little more than a completion certificate."

The team stresses that this project could not have happened without the support and efforts of their pathology colleagues and friends. Clearly, the hours of work invested in the site have paid off, with PathElective showcasing the collective knowledge that can only be earned with years of education and experience. Thanks to Dr. Kamran Mirza and Cullen Lilley, people around the world can benefit from this one-stop-shop of pathology knowledge.