There are many women in pathology making significant contributions to the field. The American Society for Investigative Pathology (ASIP) gathered detailed profiles on a number of these accomplished women to celebrate Women in Pathology Month.

ASIP members submitted their recent accomplishments to be showcased during the month of May for #WomenInPathology Month. Check out that hashtag on Twitter for even more insight into the topic. 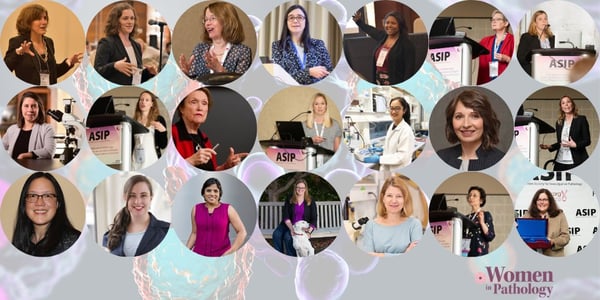 This work was promoted and conducted by the Women in Pathology community within the membership of the ASIP, focused on issues that face women in science. The community is committed to recognizing women’s scientific achievements and fostering their career development and advancement in pathobiology research.

A new study led by Rohit Mehra, MD, from the Department of Pathology at Michigan Medicine, has been recently published in Histopathology. The research, focused on identifying and characterizing renal cell carcinoma in young adults, was authored by a team of experts from the University of Michigan.

According to an article published by the Michigan Medicine Department of Pathology, the study examines the spectrum of renal cell carcinomas in children and young adults. This study was first authored by Eman Abdulfatah, MD, and with collaborators and co-authors from the Departments of Pathology and Urology and Michigan Center for Translational Pathology (MCTP).

While well-characterized in older adults, the morphological and molecular characterization of these tumors in young patients is relatively lacking. The overall objective of this study was to explore the spectrum of renal cell carcinoma subtypes in children and young adults in light of the 2016 WHO classification criteria.

Ultimately, the results suggest that renal cell carcinoma in children and young adults is a relatively rare disease that shares many histological similarities to renal cell carcinoma occurring in adults and yet demonstrates some unique clinical-pathological differences.

For more information, check out the study and read an interview with Dr. Mehra.

The College of American Pathologists (CAP) applauded that the House passed HR 7010, the Paycheck Protection Program Flexibility Act of 2020, as it provides flexibility to use funds beyond an initial eight-week timeframe. The bipartisan bill would modify certain provisions of the Paycheck Protection Program, including those related to the forgiveness of loans and the ability to defer payroll taxes. The House vote was nearly unanimous at 417-1.

If enacted, the bill would expand the terms of the loans from the Paycheck Protection Program, created by the $2.2 trillion Coronavirus Aid, Relief, and Economic Security Act (CARES) relief package. The bill would give recipients additional opportunities to repay or seek loan forgiveness.

“We applaud the efforts of Rep. Roy Chip for leading this bipartisan bill with Reps. Dean Phillips, Tom Emmer, and Fred Upton. Pathologists appreciate their work, and the work of the Ways and Means Small Business Subcommittee, as pathologists have worked tirelessly to bring new COVID-19 testing to communities across the United States as regular revenues from pathology and laboratory services ceased,” the CAP said in support of the bill in a May 27 statement.

The legislation is intended to make loans more accessible under the program by making its terms more flexible. For instance, the bill would give small businesses, like pathology practices of less than 500 people, more time to use emergency loans under the program by extending the eight-week period in which they must use the money to qualify for loan forgiveness to 24 weeks.

However, the Senate still needs to pass legislation to implement the changes. The Senate version is largely similar to what the House has passed, but it only would extend the time frame for small businesses to spend the funds to 16 weeks instead of 24.