The College of American Pathologists (CAP) has announced that Dr. Anthony Fauci will be the keynote speaker at its 2020 Annual Meeting.

Dr. Fauci, the nation's top infectious disease expert, will appear in a livestreamed event on Tuesday, October 13. CAP20 attendees can expect to hear an informative update on the research community’s response to the COVID-19 pandemic. 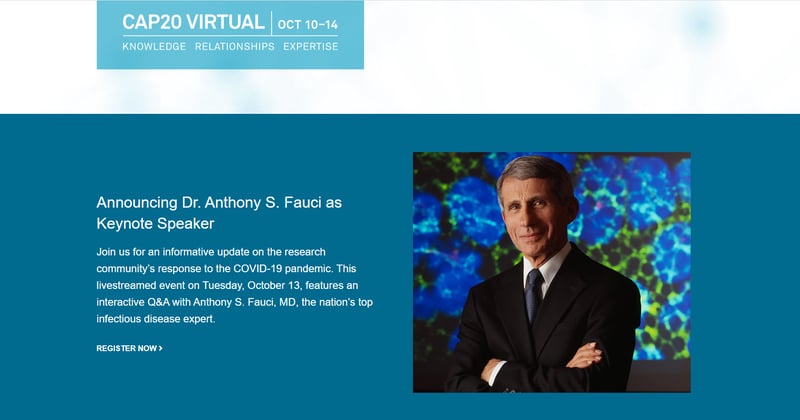 Dr. Fauci will also take part in an interactive Q&A with the audience.

In June, the CAP announced that this year's annual meeting would be held virtually due to the pandemic. "After thoughtful deliberation, we have decided to transition CAP20 from an in-person gathering in Las Vegas, to a virtual meeting starting on October 10," the CAP said on its annual meeting webpage.

Click here to register for the event, scheduled for October 10 through October 14.

A new paper in Modern Pathology validates the use of a remote digital pathology system during the COVID-19 pandemic. 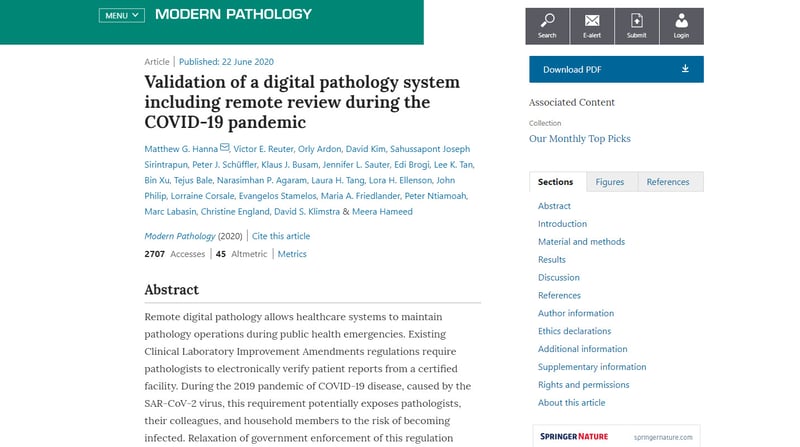 The availability of digital pathology systems can facilitate remote microscopic diagnosis, although formal comprehensive (case-based) validation of remote digital diagnosis has not been reported.

Read the paper in its entirety at Modern Pathology.

Members of the College of American Pathologists found a massive undercount of pathologists in a database of working U.S. physicians that the Association of American Medical Colleges (AAMC) maintains and is referenced in recent published works on the pathology workforce. The CAP members wrote about the undercount in an article published by the Journal of the American Medical Association (JAMA) Network Open and further call for previous works citing the data to be corrected.

The JAMA Network Open article “Re-evaluation of the US Pathologist Workforce Strength” by Stanley J. Robboy, MD, FCAP, et al., explored unintended flaws in the methods used by various entities, and why most recent workforce counts have understated by about 40 percent the number of actively practicing pathologists in the US. The authors recommend that AAMC alter how it reports pathology workforce numbers so that it includes all physicians the American Medical Association masterfile who are actively practicing pathologists. Currently, the AAMC database does not include in its count those pathologists who are also trained any of the various pathology subspecialties, such as cytopathologists, dermatopathologists, hematopathologists, forensic pathologists and eight others.

The authors estimated that AAMC’s current methodology, as reported in a May 2019 JAMA Network Open article “Trends in the US and Canadian Pathologist Workforces From 2007 to 2017” by David Metter, MD, FCAP et al., excluded about 8,000 pathologists. The article used the AAMC database and reported a decrease in the US pathologist workforce in absolute and population-adjusted numbers from 2007 to 2017. The article stated that U.S. pathologist supply decreased 17.5 percent while Canadian pathologist supply, based on the Canadian Medical Association Physician Masterfile, increased by 20.5 percent during that time period.

The authors recommend that all previously published reports, presentations, and other uses of the data from the AAMC be reexamined. Statements based on the AAMC data that report a pathology workforce shortage or decline must be reconsidered.