PRO Tip: Using Templates to Speed Up Your Dictation and Improve Accuracy

Most of us probably don’t pay much attention, but we use "templates" in our everyday lives.  We are using them so much, in fact, that our devices are even starting to figure out what we are going to say or type next.  For instance, when I go to fill out a form in Google and I start to type my name, Google will try to auto-populate the other fields for address, email, phone number, etc.  Google knows that I have used this information many times before and has essentially created a template for me.  Of course, the world of pathology is much more complex than filling in fields for name and address, but there are still so many areas where you are likely saying the same (or very similar) phrases again and again.

Over the years I have had many users tell me that I can’t template what they say because there is too much variability.  My answer to this is, “That’s true, but it’s not true.”  Whenever someone tells me this, I always think of the forensic pathologist I have been assisting for almost nine years.  He once flat-out told met that speech recognition wouldn’t work for him, because his dictations are too variable.  Then, one day as he was dictating, I started talking along with him... 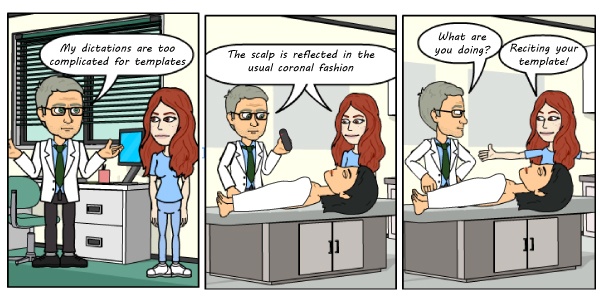 One problem with these "mental templates" is that they can sometimes get the user in trouble.  One time, he started to dictate, “The body is that of a normally developed white male of average build consistent with the stated age of 32,” and I had to say, “This is a female.”  We had just done ten male autopsies, and he was so used to saying "male" that he slipped up.  Granted, there are lots of checks and balances in place, and this would have been caught, but he was stuck in his “mental template” and because he wasn’t seeing it written, he didn’t even realize the mistake he had made.

Templates are helpful because they not only save you time in your dictation, but they can also be great reminders of those variables that you need to be sure to watch for.  When you pull up a template in VoiceOver, the first variable will be highlighted to point out to you something that is different in each report, such as sex, weight, height, measurements, color, etc. Had the doctor I mentioned earlier been using VoiceOver and a template, he could have said “Insert normal autopsy” and the following would have appeared:

[Race/sex] would have been highlighted for him to say, “White female,” and he could then say, “Go forward,” to select the next variable and say, “32."  We try to program in the most likely choices as a reminder of what you may want to say.

The time savings come in when you are able to say only a few words and have it type many more (even pages worth).  In the example above, the user would go from dictating twenty words to dictating only eight.  This also reduces the risk of error because fewer words are being dictated.  A very common template that often gets used with the VoiceOver and VoiceOver PRO software is the gross examination of an appendix.  With Voicebrook's software you could say, “Insert Appendix,” and see the following on screen:

Anyone who has dictated an appendix gross examination before would likely agree that this is close to what they said.  Every set of brackets [] is a variable that is required to be filled in for that particular specimen.  Voicebrook's software enables you to then use voice or a foot pedal to navigate the brackets and dictate in the appropriate information.

That’s where we come in.  During our project implementation process, Voicebrook collects data from your site.  If you talk to your transcriptionists, they more than likely have templates already existing in your AP system for most users. They have learned to recognize those patterns after listening to dictations for years, just like I did with the forensic pathologist I assist. Sometimes we are able to extract those templates from your AP system, but if not, we always provide you a list of gross and diagnostic templates to use as examples. You are then welcome to take the examples as they are, or change them to sound more like the way you do things at your particular site.

Standardization is another great benefit of templates.  Voicebrook has had many clients say that with the move to speech recognition, they also want to standardize some of the information in their reports. When using templates, you are prompted for the appropriate data to ensure the same information goes into each report. Many of the practitioners reading the pathology reports also appreciate a level of standardization because then they know where they need to look for certain information, regardless of who dictated the report.

At Voicebrook, we are all dedicated to the success of our clients. We have several team members with backgrounds in pathology who are always willing to help create and edit templates. Our Client Success team will collect as much data as possible from your location to ensure we are preparing you to be as efficient as possible with your implementation of VoiceOver, which always includes the use of templates.