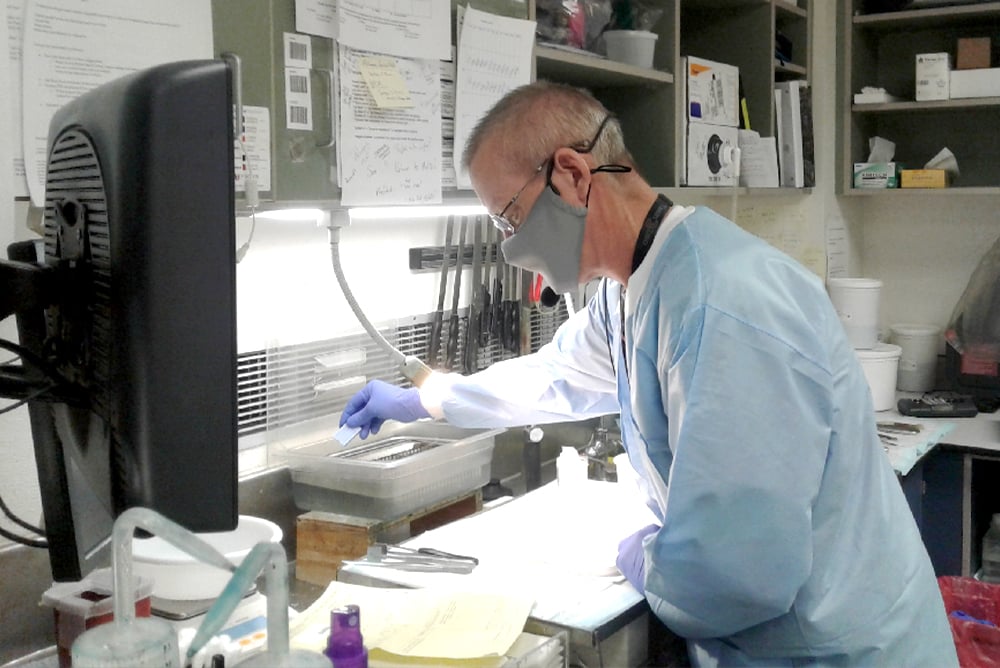 At Logan Heath (formerly Kalispell Regional Healthcare), the pathology department isn’t large, but it’s mighty. “We handle everything,” says Clint McCann, a pathologists' assistant. “I mean everything... from a simple GI biopsy to a Whipple operation. We do everything. I can't think of really anything that we don't do that I would be aware of.”

On any given day, the lab is staffed by two pathologists and one pathologists’ assistant. An average day for McCann is around 180 blocks in a single day, up to 200 blocks a day.

Though staffing levels haven’t changed in a number of years, the lab’s caseload is a different story. Over the past six years, case volumes in the pathology lab have gone up by more than 1000 cases every year. In 2019, they had a total of 13,246 cases. That’s quite a lot for a limited staff to handle.

The pathology team works hard, but they can only do so much. As a pathologists' assistant, McCann was working overtime every single day. “Nine to ten hours a day, just to get everything done,” he remembers. “And keep in mind, our case volumes have increased every year since then, so we were always having to do more.”

Long-term, that just wasn’t sustainable. The staff was overworked and exhausted. Their work-life balance was suffering. Not to mention, the cost of overtime hours was adding up to excessive expenses that the department needed to address. They made a requisition for another pathologists' assistant to help lighten the load, to meet the ever-increasing demands of their growing volume of cases.

But before filling that requisition, the healthcare system became one of the first users of Voicebrook’s VoiceOver PRO reporting software, in late 2017.

The change was apparent almost immediately.

“When we got PRO, it made it possible for me to get everything done that I have to do, within my normal 8-hour workday,” McCann says. “It’s huge. Before PRO, it was just rough working overtime consistently like that, and I mean, it was consistent. PRO is a huge reason why I don't have to do that anymore, because now I can do everything I need to do in 8 hours. I probably even still have room to do more, because it's that fast. It’s been really nice for my home life, that’s for sure.”

McCann says it’s tough to point to just one feature of PRO that helps to remarkably increase his grossing speed. “One thing that really helped out was the way that we can deal with our blocks. In the PRO templates, we have a number of options for how to organize the blocks. With our prior program, if you had a block schedule that you wanted to deviate from in any way, it was a matter of having to go in and manually or verbally delete different things. It was very time-consuming. The way that PRO works now, it just allows for a lot smoother and a lot faster assigning of the blocks.” (Cassette Summary feature)

“When we dictate now, it's just immediate. PRO just picks it up and puts it into the system immediately. It's also better at transcribing what I say. It is definitely faster and more accurate in those respects, but also the flexibility that was built into the program concerning the templates and the auto-advancing features... like when I dictate a measurement, it auto-advances to the next frame automatically. It’s just slick. All of these little things, when taken together, have really made it an extremely user-friendly and faster program.”

McCann also likes that he can have more than one session running at a time. He has two grossing stations, but Logan Health’s previous setup did not allow for him to be logged in to both stations simultaneously.

“I'd have to log off of the station I was working on and then log in on the other one to do a frozen section. It was a pain to be logging out of a case that you're in over here, and then having to login where they're doing frozen sections. On PRO, I can be logged in on both grossing sites. If I get a frozen that comes in, I just leave what I'm doing here and walk over there and utilize a different session. That in itself was huge to me and it would be to any PA that works in a situation like mine. It’s a huge benefit.”

PRO’s efficiency and productivity features led to an elimination of overtime hours at the lab. That’s a relief for McCann and his colleagues. “Had I been using our old system, there's no way I'd be able to get my daily workload done. Certainly not in an 8-hour workday,” he says.

block record for one PA in 8-hour workday

Eliminating overtime adds up to more than just an employee morale booster--in fact, it’s actually subtracting and saving money in the lab’s budget.

“Before PRO, we had to have one-and-a-half PAs working pretty much all the time,” McCann explains. “Now with PRO, we are currently (and have been for some time) running just one full-time PA on a daily basis.”

You read that right. PRO has essentially enabled one individual to do the work of 1.5 people, and all without any overtime required. That elimination of overtime saves Logan Health more than $35,500 per year. The lab was also able to cancel its requisition for an additional lab employee.

“Since we initially started using PRO, we have saved a half-time PA wage that we no longer need at this point,” McCann says. “We're absolutely saving money on overtime because I personally was averaging at least seven hours a week overtime, so that's been a huge savings for the organization.”

I think I would have been sunk a long time ago if I didn't have VoiceOver PRO.

INCREASED EFFICIENCY AND PRODUCTIVITY WITH ROOM TO GROW

McCann says that as he’s become accustomed to working with PRO, it's just gotten faster and faster.

“Our current block record for one PA in one day is 325 blocks,” he told Voicebrook. “We always used to have just one processor, because we never got over 300 blocks in a day, and one processor holds 300 blocks for a run. Now we've got a second processor, so if we go over 300 we can process them.”

The lab has done 280 to 300 blocks in a single day numerous times. But McCann thinks he can beat the current block record, and by quite a lot.

“With PRO, I bet I could do 340 or 350 blocks in 8 hours,” he wagers. He says the speed and efficiency would be even more obvious in a larger laboratory.

“VoiceOver PRO certainly would influence turnaround time in a hospital that employs a large number of PAs and has a huge volume of cases. They are definitely going to get a better turnaround time because they're getting in more stuff than they can get out in a day, so they would certainly be able to monitor productivity and see an improvement with PRO.”

McCann offers these words to his pathology colleagues who might be considering a switch to VoiceOver PRO:  “It has surpassed my expectations. I had no idea I would be utilizing what I am today. I'm extremely happy with it… I would say if you don't want to be battling with your dictation system, you should invest in PRO, because the ease-of-use is just phenomenal.”