Do you ever feel like some days your recognition is really good and other days it's as if the system has gone crazy?  Some users even report that recognition is great in the morning, but after lunch Dragon or VoiceOver seems to keep making mistakes.  Whenever a user comes to us with this sort of issue, our first question is always, “When was the last time you ran the audio setup wizard?”  Unfortunately, the response is often, “The what?” 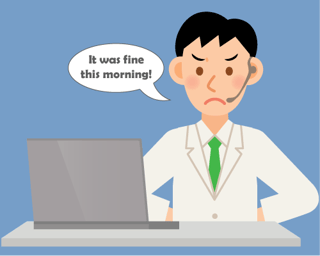 What is the audio setup wizard?

The audio setup wizard (ASW) is a tool that is used to help calibrate your microphone to your environment. You've probably already used this tool during your initital training.  The ASW will instruct you to perform two short readings (about 15 seconds).  All you have to do is follow the instructions on the screen.

The ASW will also appear the first time you work on any new workstation after your initial training.  The reason for this is that you are logging into your profile from a computer that you haven’t used before, and your speech recognition software assumes you must be in a new location.  This new environment will likely have different background noises than the previous location, so this calibration is necessary.

How to get the most out of your calibration

While you follow the steps of the ASW, try to speak in your normal tone and pause briefly after each sentence to allow the system to hear any noise in the room when you’re not speaking.  This is especially helpful in situations where the system will type words like ‘the’ or ‘a’ when the user is not even speaking.  In this instance, the microphone is hearing background noise and assuming you’re talking because, without calibration, it doesn’t know what the room sounds like.

Another issue we have found over the years is that users have great recognition when training, but a week after go-live they say recognition has degraded.  After a little investigation, we learned that users tend to close their office doors during that go live time frame because they are trying to learn and concentrate.  Once they get more comfortable, they go back to their normal habits.  The door might be open or a radio could be on in the background, and because all of the training was done in silence, the program doesn’t know how to interpret the new sounds.

The moral of the story is, if you’re having recognition issues, run the audio setup wizard.  It’s as easy as clicking ‘tools’ on your VoiceOver toolbar and then clicking on ‘Audio Setup Wizard’.  After that, follow the on screen instructions.  Even if you're not having recognition issues, making this a monthly habit can only help your system performance.  If you have any questions, or are still having trouble, please contact Voicebrook support for further assistance.