Our facility for Pathology at CMC Hospital was built from the ground up and it was architected based upon the “lean concept. We determined that voice recognition would be a big part of that.

We looked at Dragon Medical, but we selected VoiceOver, because it was a much more robust system. We wanted to be able to use it for system commands, navigation, and workflow within SoftPath, and the implementation and added services that Voicebrook offered made the decision easy for us.

Using VoiceOver for our reporting allowed us to refrain from hiring two transcriptionists and also helped us to eliminate one transcriptionist from one of the four hospitals that our practice staffs.

Practice efficiencies have increased dramatically. Cases dictated in VoiceOver are available immediately. They don’t sit in a voice queue. I do not have to go back and open, edit, and save a case. I do everything in real time. Prior to VoiceOver 80% of our cases were completed in 48 hours. Since implementing VoiceOver overall turnaround is down to 30 hours.

Gross reporting is a lot faster. We use a set of standardized templates that Voicebrook helped us to build, and this allows us to quickly create gross reports. From a quality perspective, the standardization of templates has helped, and it is much easier for us to find and edit the information in our reports.

It really helps out with autopsies.   Prior to VoiceOver, autopsies would take forever. Now I can complete an autopsy in a day. We built a comprehensive autopsy template into VoiceOver and it has just been outstanding.

We have an entirely new way of doing things in terms of adding pictures to the report, annotating them, and signing out. You can’t do that without VoiceOver unless you have a transcriptionist sitting next to you. When you perform these tasks in real time you are thinking about it while you are looking at the images that are in the report and you can comment on something that you see in the picture rather than having to remember it after the fact.

The addition of pictures has increased the quality of our reports. I also do a lot less editing with VoiceOver than I did with my transcriptionists. Overall it is superior to most of the transcriptionists I have worked with. 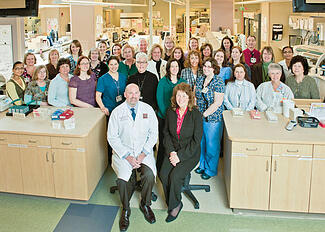