People hate being misunderstood. Whether it’s by someone else, or by a speech recognition tool, it’s frustrating when what we say is misinterpreted or inaccurately transcribed. We can’t do much about other people, but we can help improve the accuracy of our pathology transcription. If you’re having trouble with your speech recognition software, here are a few tips to help.

If good accuracy is the norm but a user finds sudden accuracy issues, it may be as simple as taking a few seconds to check the microphone.

First Word is Always Missing or Not Recognized Correctly?

Remember: if the microphone isn’t on, it can’t transcribe what was said.

Transcribed Words Differ from What was Spoken?

The users with the best accuracy have spent a small amount of time up front diligently correcting misrecognized words.  Using the correction function instead of saying “scratch-that” and repeating the phrase ensures the mistake does not occur a second time.

With VoiceOver,  follow these steps to correct transcription errors:

Example - Dictation results in the following:
"No intracranial hemorrhage or fracture of the calvarium.  There is no mass effect or edema to indicate an acute informed." 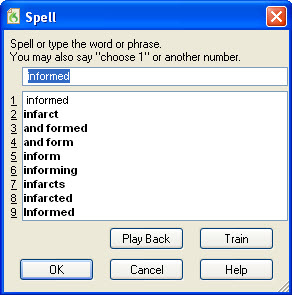 The word “infarct” was spoken, but the word “informed” was transcribed. To correct:

**If the word did not appear in the list, it needs to be typed using they keyboard or spell by voice until you see it in the list to choose.

By following these steps accuracy will improve when a misrecognition occurs.

One other pointer: if one word in a common phrase was misrecognized, correct the entire phrase. This helps gives context that these words typically appear together.

Beyond Correction. What If It Still Makes Mistakes?

One challenge faced by speech recognition is familiarity with terms, acronyms, abbreviations, names, places and products. The computer recognizes most of what is said because the speech recognition software has a vocabulary that includes thousands of words used while dictating (including Pathology terminology).  This results in a high accuracy rate right out of the box for most users, but if a dictated word is missing from the vocabulary, it cannot be transcribed correctly. In the case of the correction technique above, if a word was misrecognized because it did not exist in the vocabulary, that process will add it.

Each word has two important components in the Vocabulary, the ‘written form’ and the ‘spoken form.’ Often adding the phonetic spelling of a word as a spoken form will improve accuracy faster than the correction technique. It’s also beneficial to add commonly-used phrases where recognition issues happen often. This can be useful when you have an acronym with specific formatting needs such as cancer staging acronyms.

Still having issues? Call us!